This is my first attempt at a blog post that no one will read.

I hope to post events, book releases, release parties and other stuff here and see if anyone reads it.

I also want to try to post a photo in the body of the post AND a featured image … Let’s see how that goes. 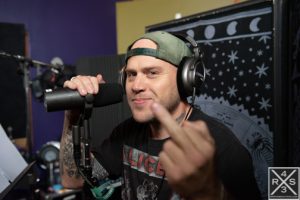 Using a test image of Matt from The Bronx in the vocal room recording Bronx VI I think. They asked me to come to the studio to shoot some promo images for them but the drummer, Joey, was in Vegas, so it was really a waste of time. But I like the fellas in the band, so it was fun hanging out with them and watching them do some recording. One good thing came out of this photo shoot – I got a photo of Joby pretending to sit on the toilet while reading a High Society magazine. The image is funny, The owner of the studio (I forget his name) asked for a print and it hangs in the studio … Plus, The Bronx used it as an insert on one of their recent 7″ releases.

I’ll add a feature image and see how it goes.

I grabbed a photo of Ricky Warwick for the feature image. That was a fun photo/video shoot in Joshua Tree at Otis’ house.

I got Covid booster #3, the omicron booster and have almost ZERO side effects. Just a sore arm. I got my flu shot at the same time and same result – Sore arm. No problems!